I’m going to say it right away, I (Yann) may have personal biases towards this project, as I helped produce it (‘investing’ $1000) and as a result of that, actually ended up with a co-star credit on the show. 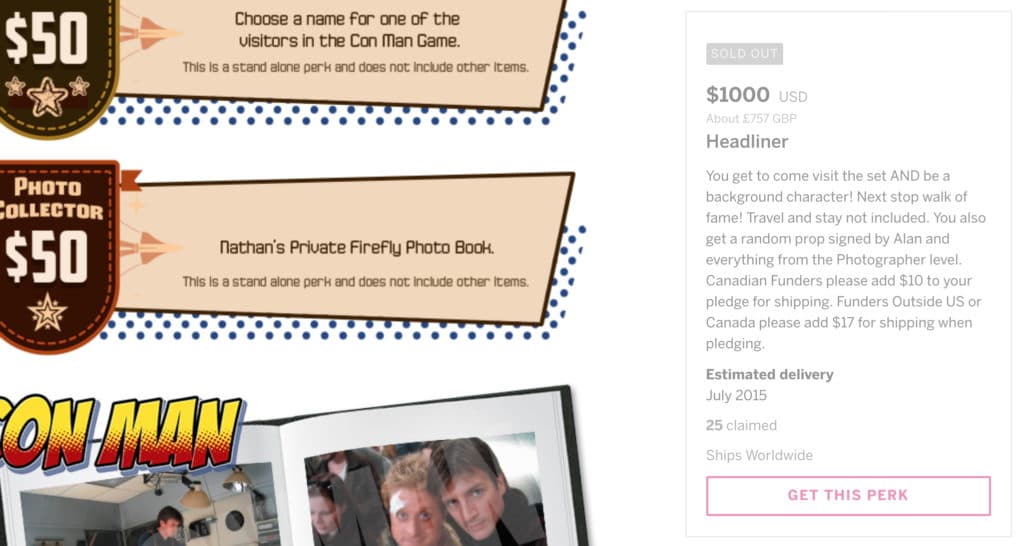 They were initially asking for $425000 to get the project running and deliver 3 original episodes.

They reached $1 million in record time and ended up with $3,156,178. Stretch goals were then announced, and they reached all those levels in a month.

Some funny videos were posted throughout the campaign, to get even more steam into Con Man’s marketing engine.

“Making it” in Hollywood

Not wasting any time, filming started in June 2015 and that’s when I physically came into the picture.

Having managed to find the funds for the ‘Headliner’ reward, I also dealt with the issue of needing to fly to LA and stay there for a while.

Flash forward to mid-June, where I got news that I was actually going to be able to come on set for three days (when the ‘deal‘ was; one day on set, background talent i.e. extra i.e. a silhouette in the background).

And there I went, unsure what to expect but ready to document the adventure with my phone.

Needless to say (and I’m going to say it anyway) that it was phenomenal on all levels.

During those 3 days, the filming took place in the Long Beach Convention and Entertainment Center.

I was very impressed by the whole thing from the very start, far away from the web-series I was used to, filming medieval stuff int he woods with friends back in Provence.

I was a bit worried on my first day on set as I was doing my best to have the camera spot my face (if you’ve ever seen Ricky Gervais’ Extras, you know the struggle is real) and it was not working that well, until…

Sitting on a comfy sofa in a hall of the convention center, waiting on the time to go do some extra work (walking in the background, standing around…), I was getting frustrated (even though I was just an extra, I strived for more, you know?), until…

Jasper Bernbaum*, the ‘office production assistant’, suddenly appeared and informed me that a scene was about to be filmed, that a line of dialogue was involved and asked if I was interested. To this day, I still remember how happy I was to hear this.

I was provided with this little A5 notebook-like collection of papers with the lines for the day and the call sheet, all in one neat single package.

I was ‘FAN‘ in the script and the name of the character ended up being way more interesting than that. 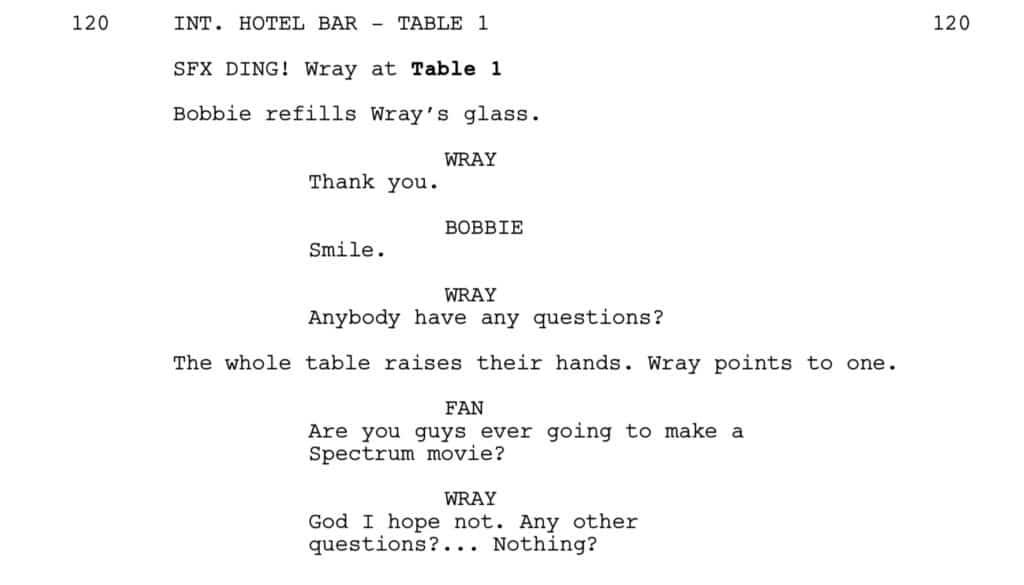 It was the VIP party sequence and a short bit is actually at the end of my showreel.

It does not end there though. A sort of crisis occurred (I’m being a bit over dramatic in the terminology here I admit) when Alan came to the VIP table to explain what was expected in that scene. Alan was having a look at where the camera was located in relation to where the extra needed to be seated… and started to explain to the guy on my left that there was a line involved and stuff. Which is the precise moment when I ‘intervened‘ with something along the lines of “Hmm, apologies, I’ve been told I had a line, I’ve been working on it for the last hour, is it the same thing?”, Alan asked for it, I delivered the line, it was secured and was happy once again.

A fake convention was created; cosplays, exhibit hall, signing waiting lines… That’s when I discovered Space Wolf, a gentleman using laser to print original artwork on wood; I would end up purchasing quite a few of those wooden plaques in the following years. I talked with people involved with the production and finally had the occasion to discover what a Cinematographer’s job is really, by asking Jay Hunter directly.

Met some lovely people, took some pictures with them. 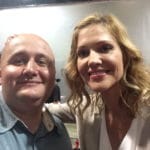 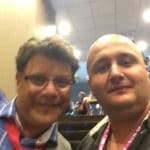 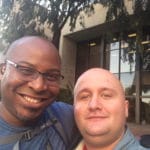 And I was done and went back to Provence.

Major difference between stage and screen

When you are on stage, you are able to constantly shape the material given to you by the playwright; plus, you have a relative degree of control throughout the whole production, you get immediate result from the live audience and you are around even when not actually on the stage. When it comes to screen, when you are done filming your scenes, the whole thing becomes out of your control and will be seen after it’s been edited and when the project is distributed. And there is always the risk of being entirely cut from a film during post-production.

To be honest, I was anxious to see how it would look in the actual show. Or rather, I hoped I would be seen as much as possible.

As it turns out, the production team documented some parts of the project live on the app Hang w/, which was a blessing because it meant I actually got to know way before the series was released if I was cut or not. Another great day of my life! I was not actively pursuing an acting career at the time and we had a family history of being cut from movies (I was the first to actually have a line though).

Now I could really wait without putting too much pressure on myself and be genuinely exited about the release.

The trailer came in July and I was happy again because I realised it was good stuff. Which you can’t really know when you are only given one line. I admit I only read that unique line from the script provided.

The show is out

September 30, 2015 was the day when the first 4 episodes of Con Man were released, on Vimeo On Demand.

It was the day I realised my character was named Mithrandir Elessar Peregrin Smith III which is truly awesome. I’m still unsure, to this day, who is responsible for this name but I love that person.

It was also the day I found out I was indeed seen in plenty of little places AND one of the funniest thing was that I actually had a second line, which I never recorded. When all the fans are waiting in the line to get an autograph from Wray Nerely, just after the hugger and before Darth Vader, little old Yann comes and says “Hello!“. Kudos to the person who chose to keep that take and have someone do ADR for it; as, obviously, there was no boom mic above my face at the time.

I’ll spare you all the details and just say that the show was on Vimeo on Demand for a while, then found distribution via Comic-Con HQ (A Lionsgate/ Comic-Con International joint venture) in 2016 and went a way into TV via SYFY in 2017. In 2019, Con Man can be seen on iTunes. Alan & Nathan had very nice words in the commentary for ‘Behind the Lines‘ but you’ll have to find that yourself.

Season 2 was financed and released by Comic-Con HQ in 2016. I received an email around June of that year, saying that extras were needed again. However, I was about to be on stage for a whole month in August (Edinburgh Fringe) and was in the middle of rehearsals.

The end of an era

I think it’s been said that SYFY optioned 8 seasons of Con Man (or something like that); no news on that front, as of 2019.

I’m not going to do this because of the level of my involvement, however, I’ll just say that some people may not get it at all; it’s quite niche and the humour seems to me as being very American.

The Oracle of Bacon

In addition to all of that, I get to play in the big league of people you can boost their egos by checking their own name in relation any other actor that like. Thanks Con Man! Thanks Oracle of Bacon!

*Massive shout-out to Jasper Bernbaum! In ‘Behind the Candelabra‘, we talked about Liberace and how – using Tony Corinda’s memory techniques – he used to know a lot about everyone he was working with; name of kids, family, etc. Jasper knew the names of all the Indiegogo backers who came on set and it genuinely felt like we were special and (even though I just googled him to make sure I had the last name right for this article) an experience which was already special by nature, was made even extra special thanks to that touch. Thank you Jasper! NB: Go check his work there: www.jasperbernbaum.com/

**Shout-out to PJ Haarsma who was really making sure every gear was well oiled, was leading most live videos and doing plenty of other behind the scenes essential stuff. He is making sure everything is working out fine on RETRO REPLAY these days, the YouTube show with Nolan North and Troy Baker. Go have a look! 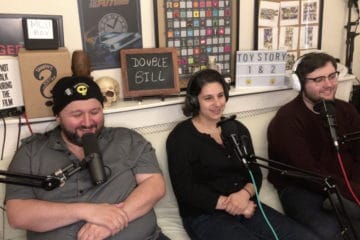 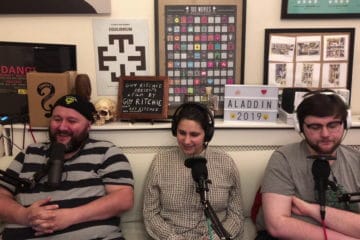